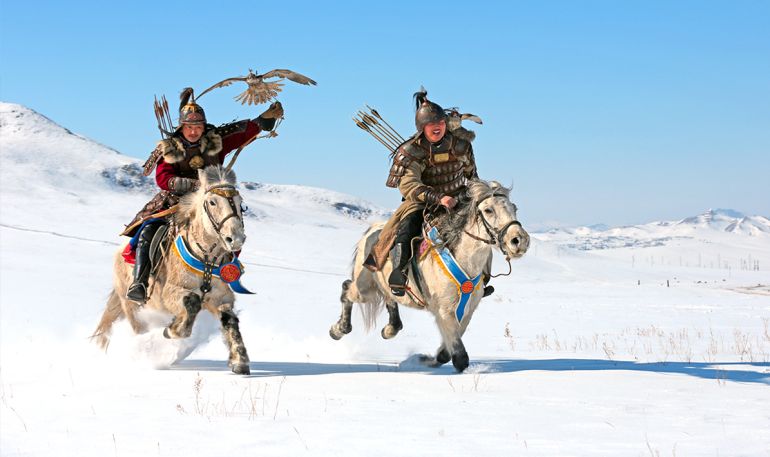 The period of Hunnu State

Mongol, Turk and Jurchen races had been living in the Mongolian territory from ancient times. They alternatively ruled over each other. However the first politically organized community was the Hunnu State. It was the prototype of the states of Mongolia. According to the chronicles, there was a nomadic tribe Khu in the 5th century BCE. The people was engaged in animal husbandry and each tribe had its chief cleric. They formed a confederation of tribes. Those were the Hunnu people who became particularly prosperous in the 4th century BCE. The confederation annexed 24 Hunnu aimags. Tumen was named of the Khaan of the Hunnu. Tumen belonged to the aristocratic family of the Khian tribe. It was since that period that Khaan ceased to be elected at the conference, but became a dynastic title. Hunnu people fell victims of the aggressive policy pursued by the Ching dynasty, and aimed at expanding the territory to the north. The Hunnus were driven far from the Ordos territory. The Chinese fortified their new Great Wall. Tumen khaan made unsuccessful attempts to unite various Hun aimags and organize the state. Tumen Khaan, induced by his young wife, made his son by his youngest wife, the heir to the throne. But his elder son Modun, assassinated both his father and his younger sibling and seized the throne in 209 BCE. The Hunnu state was not a merely Mongol State. It was the first organized State among the nomadic people of the Central Asia. Modun khaan annexed the territories in the north and west. In 200 BCE he defeated the Chinese. In 198 BCE Modun khaan conquered western Turkestan and controlled the trade road, which connected the West and East. The Hunnu State developed into great power. The territory of the Hunnu State extended from the Ordos to the lake Baikal, and from the Khyangan mountain range to the Altai mountain range. However, the Hun Dynasty of China had been consistently pursuing on the “divide and rule” policy, which in the end brought to the breakup of the Hunnu State in 48 BCE, and further collapse.