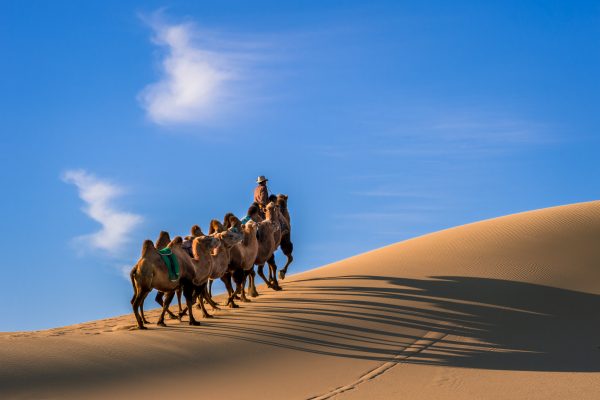 In this tour you will be able to visit the most important and significant places of the Gobi desert, ride two humped bactrian camels among the sand dunes, climb up the tallest point of the dunes that offer spectacular view of the surrounding, visit camel herders family, walk in the beautiful gorge of Vulture valley at the Gobi three beauties national park.

[Day 1]
From Ulaanbaatar city fly to Dalanzadgad, which is the capital of Umnugobi (Southgobi) province (flight duration 1.5hrs) via local airline.  Upon arriving at Dalanzadgad have the first taste of Mongolian brunch and start the exciting journey around Gobi. First travel destination will be the Gobi Gurvan Saikhan (Gobi Three Beauties) National Park. The park is home to lammergiers, ibex, Mazaalai also known as the Gobi bear, snow leopard. At the park you will visit the local museum, hike through the beautiful gorge of Yolto enjoy the breathtaking scenery. Drive to tourist camp and rest. Before dinner we will go horse riding and explore the surrounding. Dinner and overnight stay at tourist camp

After breakfast we will continue our journey and drive towards the second destination, Khongoriin Els. Khongoriin els or Khongor sand dunes stretches for 180km. Unlike other deserts of the world these sand dunes have the majestic Servei mountain on its northern side and oasis on southern side. We will arrive at the camp by lunchtime. After meal, we visit the local camel herder’s family and go for camel ride. It will be perfect to climb up the highest dune the Duut Mankhan (Singing dunes) before sunset to truly admire the majestic Gobi in golden color. Overnight at tourist camp.

[Day 3]
Our third destination is the ruins of Ongi monastery, which is located at a peaceful valley of  Saikhan-Ovoo soum, Dundgobi province.   On the way to Ongi monastery, we will have lunch at “Bayanzag” also known as the Flaming cliffs, where paleontologist Roy Chapmen Andrews first discovered dinosaur eggs and proved to the world that dinosaurs laid eggs. Upon reaching Ongi  tourist camp you can take a short hike to the temple ruins, learn about the religious purge years that hit Mongolia, enjoy the scenic views and in the evening enjoy traditional clothes fashion show organized by the camp. Dinner and overnight at tourist camp.

Early in the morning we drive north towards our next destination Kharkhorin, the ruins of the ancient capital city of Great Mongolian Empire, where the history meets the present. We will have picnic lunch on the way. At the destination we will visit Kharkhorin museum, the vault of precious exhibits starting from stone-age until 18th century. Have dinner, rest at the tourist camp.

[Day 5]
After breakfast we will visit Erdenezuu Monastery. Built in 16th century the monastery is unique for the materials and bricks used to build this temple came from the ruins of the ancient Kharkhorum city. Furthermore, it is one of the very few Buddhist Monasteries that remained standing after the religious purge of 1937 to 1939. Today the monastery stands safe surrounded by 108 stupas and visited by all local and foreign tourists alike. Head back and reach Ulaanbaatar city by evening. End of trip. 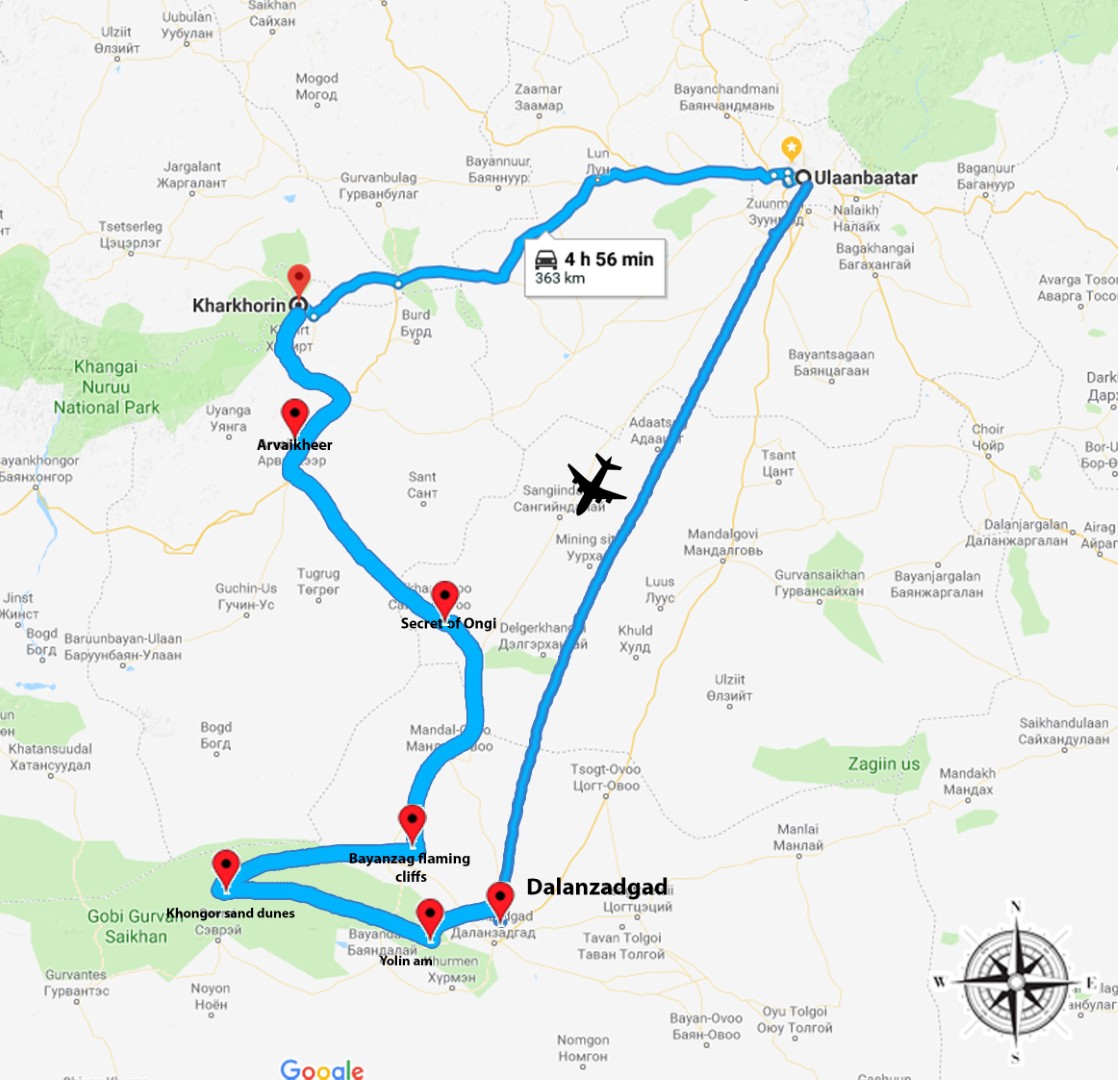 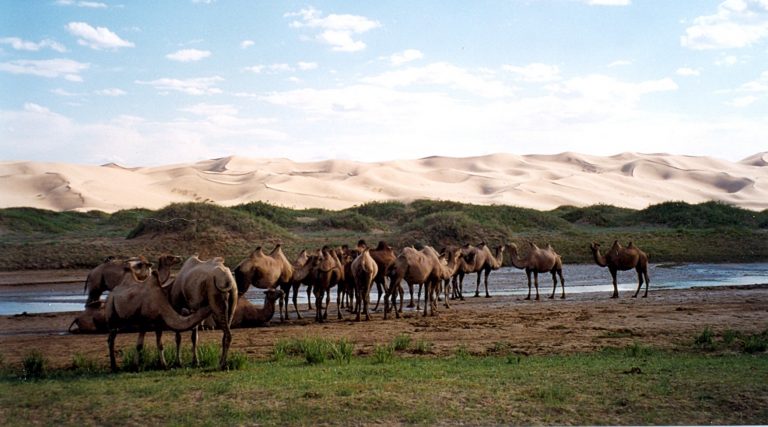 Gobi Gurvan saikhan National Park is a national park in southern Mongolia. The park was established in 1993, and expanded to its current size in 2000. The park, at nearly 27,000 square kilometers, is the largest national park in Mongolia, stretching 380 km from east to west and 80 km from north to south. The park is named for the Gurvan Saikhan Mountains, which translates to the Three Beauties. The name is derived from three subranges, the East, Middle and West Beauty. The range forms the eastern half of the park. The park lies on the northern edge of the Gobi desert. The higher elevations contain areas of steppe, and reach elevations of up to 2,600 meters. A number of rare plants and animals are found in the park, including the elusive snow leopard and the Gobi camel. Areas of sand dunes are found, most famously the Khongoryn Els – the Singing Sands. Another major tourist destination is Yolyn Am (Yol Valley), which is connected with Dalanzadgad by paved road and a mountain valley that contains a large ice field through most of the year. The park is usually accessed via the town of Dalanzadgad, which has airport service to Ulaanbaatar. 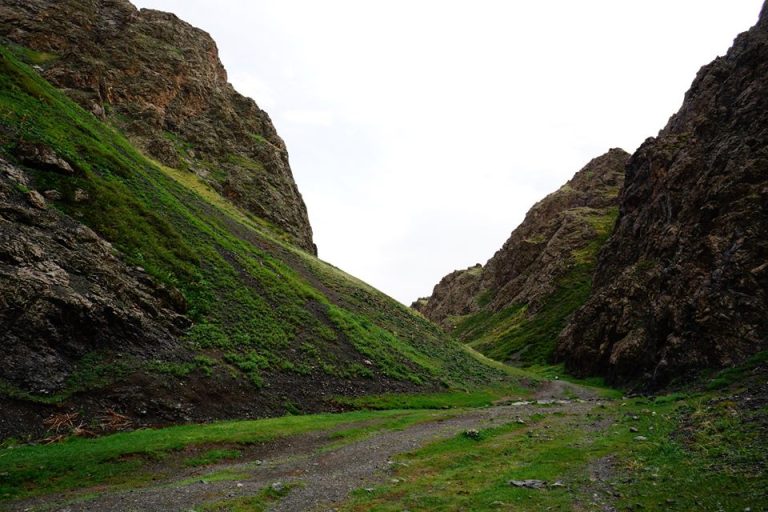 Yoliin Am (Lammergeier gorge) is a gorge located at the Left Beauty of the Gobi Three beauties national park of South Gobi region.  It is named after the Lammergeier bird that lives in the area, a distinct bird larger than the bold eagle. Yoliin am is one of the places to visit because of its unique and beautiful scenery. The gorge has steep walls of almost 200m tall that stretches for 2km also has a small river that runs all the way through the gorge.At winter times thick ice forms in the narrow passage and does not fully melt until the beginning of July, therefore it is a perfect place to cool during blazing hot Gobi days. 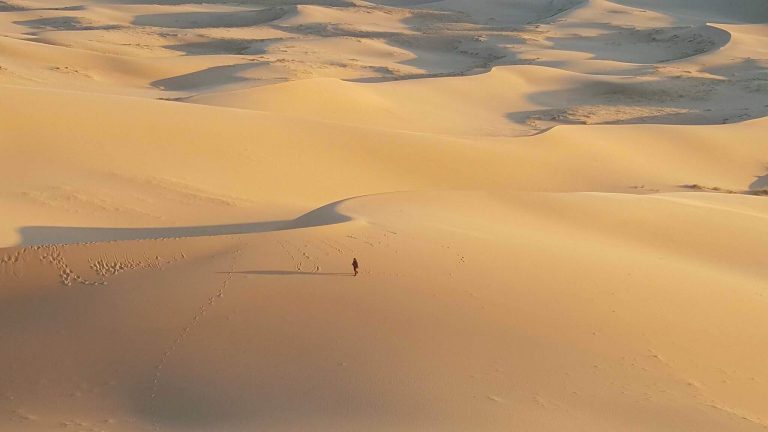 Khongoryn Els also called Duut Mankhan ( singing dunes )  is popularly known as the “Singing Sands”. It lies within the Gobi Gurvan Saikhan National Park  in Mongolia. The sand dunes extend to over 965 square kilometres (373 sq mi) area. The dunes extending up to the foot of the high Altai Mountain range, lie about 180 kilometres (110 mi) from Dalanzadgad. It is at a distance of 130 kilometres (81 mi) along the desert tracks to Bogd  Uvurkhangai in the north, and 215 kilometres (134 mi) 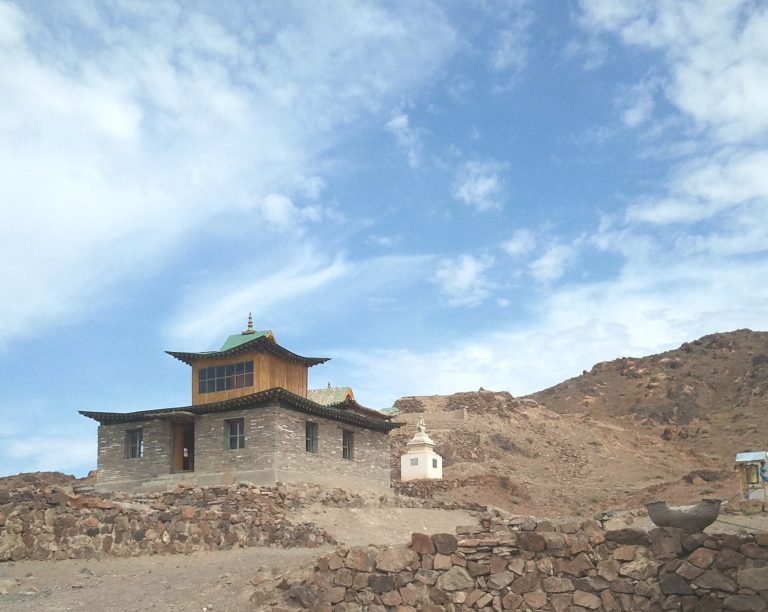 Ongi Monastery is the collective name for the ruins of two monasteries that face each other across the Ongi River in Saikhan-Ovoo district of Dundgovi Province, in south-central Mongolia. The Barlim Monastery is located on the north bank of the river while the Khutagt Monastery sits on the south bank. The older southern complex consisted of various administrative buildings as well as 11 temples. The northern complex, built in the 18th century, consisted of 17 temples – among them one of the largest temples in all of Mongolia. The grounds housed also 4 Buddhist universities. Founded in 1660, it was one of the largest monasteries in Mongolia and housed over 1000 monks at its height. The ruins are situated about 18 km south of the town of Saikhan Ovoo. Both complexes of Ongi Monastery were completely destroyed in 1939 during anti-religious purges carried out under Khorloogiin Choibalsan, the leader of the Communist Party of Mongolia. Over 200 monks were killed, and many surviving monks were imprisoned or forcibly laicized and conscripted into the Communist controlled army. A large number of ruins including a tall stupa can be seen on the river and on the surrounding hills. In the 1990s, it was decided to rebuild the monastery. The first temple was inaugurated in 2004.There is a small museum in a ger in front of it. One of the stupas has just been reconstructed as well. It has a conmemorative plaque indicating the names of the monks who were killed in 1939. 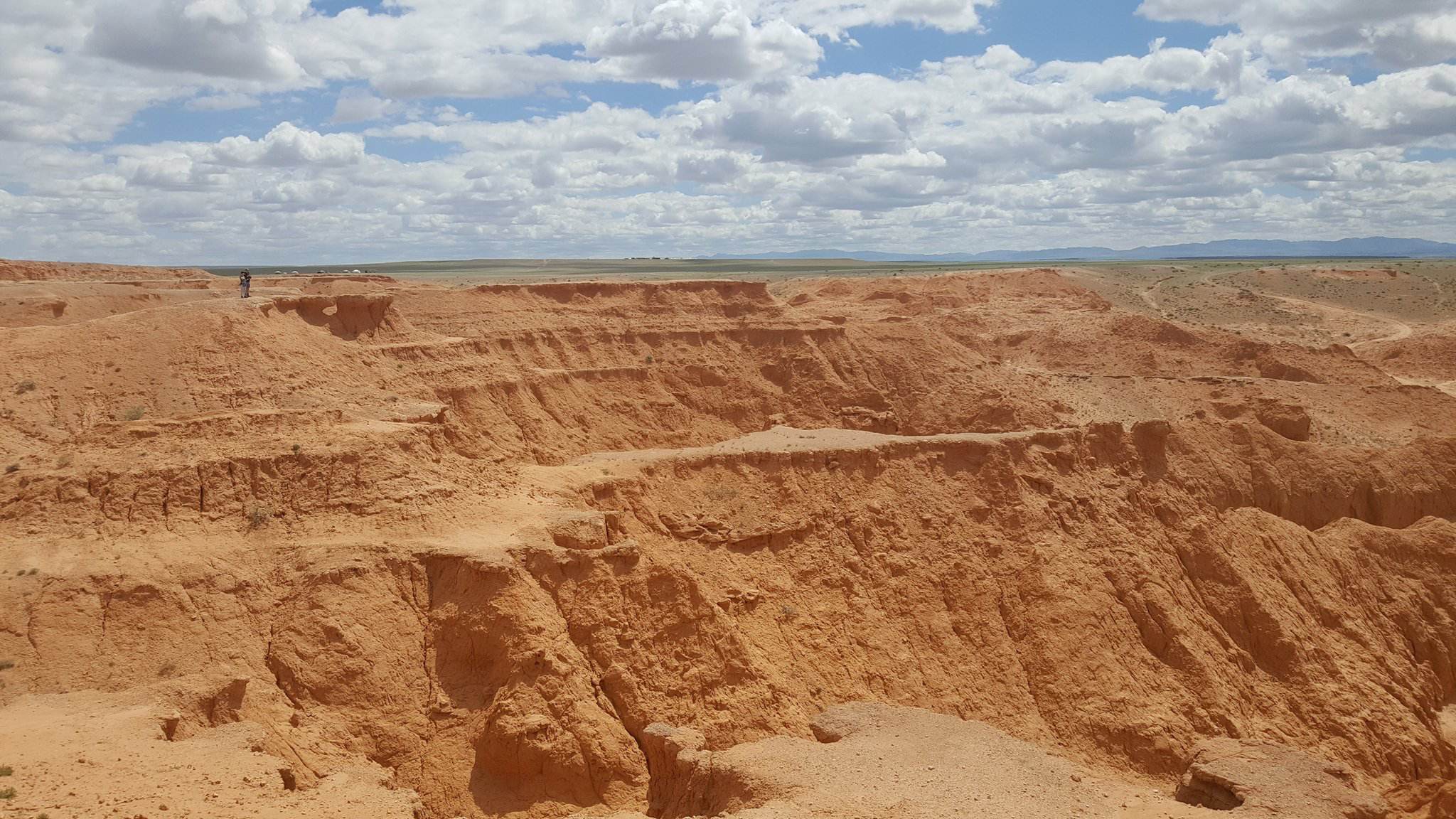 Bayanzag or the Flaming Cliffs are probably one of the most historic and famous sight in the Gobi desert. In 1923 when archaeologist  Roy Chapman Andrews discovered dinosaur eggs this destination became an important paleontological  sight for tourists and scientists alike. 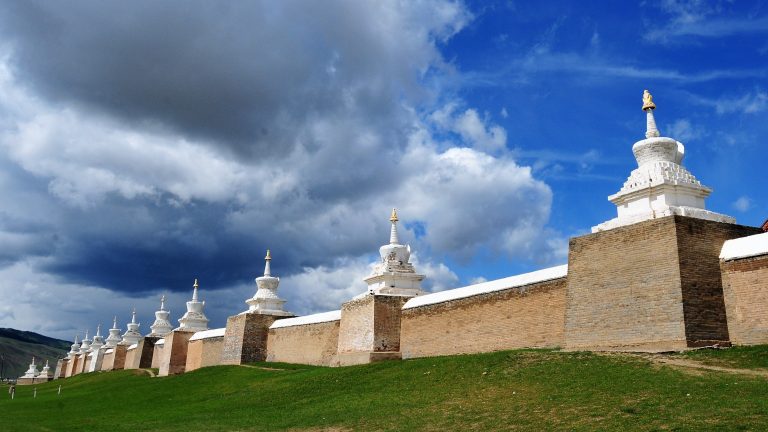 In the main hall it holds the precious artifacts found in the Orkhon valley belonging to Stone age, Bronze age and ancient empires. Built in 2011.

Be the first to review “South Gobi tour” Cancel reply